Adele was born on June 10, 1789, and this was a source of great joy for all the family and for the people of the region who appreciated the Trenquelléon family. She wasbaptized this very day in the church of Feugarolles. Throughout her life, Adele will celebrate the anniversary of her baptism. Adele discovered that from the day she wasbaptized, that something had been recorded inside her. All the baptized people engrave the face of God in their hearts. She discovered the treasure we all carry inside.

In 1797, she left for exile in Spain, with her mother and her brother Charles. In 1801, she made her First Communion in San Sebastian and the desire to be a Carmelite was born in her. In 1803, two years after her return in France, she did the Confirmation. From that moment, her desire to make Christ known and loved grew stronger. In 1799 Adele sister’s Désirée was born.

In 1804, she founded the “Little Association” whose spirit is very close to the Congregation founded by Father Chaminade in Bordeaux. Congregation to which the “Small Association” will be affiliated in 1808. A “dear project” will soon appear in the heart of Adele, which will become a reality when on May 25, 1816, in Agen, the Institute of the Daughters of Mary (Marianist Sisters).  The purpose of the institute was the mission, beginning with the accompaniment of the members of the Congregation; then it will be divided into free classes, retreats, catechesis, various activities… His father is Baron Charles de Batz de Trenquelléon, owner of the castle where the family lives and of all the lands that surround it. He is a military man and very often, he is away from home in the service of the King of France.

When her father is at home, Adele is especially happy. Her relationship with her fathers is excellent, but different with each one. Her father is considerate and affectionate, although for his profession of military seems serious and distant for strangers.

Adele is her eldest daughter, and though her life takes a different course from what he might expect, he admires and loves her very much.

The baron used to bring a gift according to her aristocratic condition: dolls in childhood, beautiful dresses when she is older … but he soon realizes that this is not what Adele wants and what makes her happy.

Therefore, when he returns from Paris, Agen or Bordeaux, he brings something for the poor, for her oratory … From her father Adele must have inherited being a person with a strong but disciplined character, firm in her decisions and with a great sense of responsibility. Her mother is Mrs. Úrsula de Peyronnencq, a descendant of St. Louis and a noble family. She is an extraordinary woman who takes care of the education of her children and knows how to accompany them in every moment of her life.

Adele often goes with her mother to visit the families who live on her land, visit the workers at home, take food, clothes and medicines, take care of the sick as if they were from her own family …

Adele learned well from her mother whose works of charity are countless (even for her own family). When the baroness died she only had 5 francs and the clothes she had to use.

It is certain that Adele inherited from her mother generosity with the poor, treating everyone equally without believing herself superior for being of a noble family, simplicity and, above all, love of God above all things.

Her brothers, Charle and Desirée

The French revolution began during the months of Adele’s life in the womb of Mrs Úrsula, her mother, and her father suffered the vicissitudes of France in the late eighteenth century.

The General Estatesmet in Versailles to discuss the grave crisis that was ravaging the nation. The Third State demanded justice and equality, while the privileged estates resisted the social, political and economic changes inspired by the Enlightenment and demanded by the evident reality of the State deficit and the hunger of people in countrysides and cities.

The development of the revolution, the dispossession of family property, exile, uprooting, poverty that surrounded the castle of Trenquelleón where she was born, as well as the proximity of death … led Adele to discover the precariousness of Life and the treasure of eternal values, to live in the castle with a free heart, without a sense of possession, like the pilgrim who dreams paths and goals, patiently prepares and waits for the moment of his departure to walk to reach and enjoy the goods desired.

In this reality, Adele was born, grew and heard the call of God. The profound experience of his love during her childhood making a dent in her soul, this reached in her adolescence and youth the depths of those who are seduced by Jesus, follow his footsteps illuminated by the light of the Spirit, strengthened by his Word, accompanied by his Presence.

This is Adele, a profound woman, seduced by God, whose spirituality is nourished by the Holy Spirit in prayer and the sacraments. Jesus, her great treasure, was the source of her joy and the motive of an enthusiasm capable of bringing together youth and adults in the Small Association to share faith, prayer and mission.

Adele’s natural leadership, influenced by the style of Jesus, had the appeal of the testimony of life, the friendship and affection of her letters, the dynamism she maintained in her meetings and apostolic journeys by the peoples of the Agen.

The restlessness of Adele’s heart in her search for God, her desire to progress in the interior life and Providence enriched her with the spirit of the Marian Congregations of Father Chaminade in Bordeaux.  Therefore, little by little, the love of God became Project, “Her beloved Project” of consecrated life in community and in alliance with Mary, given to the service of the Gospel. Adela writes to one of her best friends. She was 20 years old.

It is to you, dear friend, that I am writing today. I do so shortly after my meditation, which was not a great success, although the topic was a good one: self-knowledge.

Ah! Dear friend, I was captivated by the reading Ihad done on the topic. First, we do not know ourselves for lack of introspection. We do not pause to reflect on our tendencies, on the motives that spark our actions, and on the intentions that determine them.

Secondly, we normally compare ourselves to people who have many refects and who live a worldly life, so it is not surprising that we conceive an utterly false and vain opinion of our own merit.

But our conduct must be compared to that of Jesus Christ, our divine Model, and to that of the saints, who are his perfect imitators. Then we shall see how wrong is our self-image. My dear Agathe, reflect on how God judges us, what we are in his eyes, and what hethinks of our best actions. 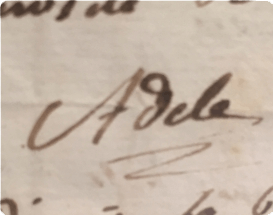